Fannie Mae’s Mortgage Lender Sentiment Survey® from the second quarter of 2016, reveals that as we head into Q3, lender attitudes toward the housing market have become increasingly optimistic.

Surveys that were conducted in May show that lenders are reporting an increase in GSE eligible purchase mortgages and according to various sources, this has occurred over the past three months. In part because of this, as is congruent with traditional seasonal variation, growth bounced back to 70 percent on net, compared with 20 percent in Quarter 1 2016 and 71 percent this time last year (Q2 2015).

Demand expectations have stabilized around the same level as the matching phase of 2015 for lenders. However, apart from normal seasonal variation, there is expected to be a minor decrease in lenders’ purchase expectations for GSE-eligible and non-GSE eligible mortgages to sixty and forty-three percent correspondingly, while government loans are expected to increase to fifty-eight percent.

Most lenders are looking forward to keeping their on-net credit standards at the same levels. However, lenders have also noticed a sparing net ease of credit standards, which is a factor for all loans across the board. A small percentage of lenders (4%), are likely to consider a small decrease in on net credit standards within the next three months, as they have been decreasing since Q4 of 2015.

This prediction is confirmed by Senior Vice President and Chief Economist at Fannie Mae, Doug Duncan who stated, “Key survey sentiment indicators suggest that lenders remain cautiously optimistic in their market outlook. The outlook for purchase demand growth over the next three months returned to levels similar to last year, while the outlook for refinance demand and profit margin improved moderately versus last year’s levels.”

Caution is the key word here, as Mr. Duncan added “The trend toward the easing of credit standards appears to be tapering off, as the vast majority of lenders, around 90%, reported plans to keep their credit standards about the same. The survey was conducted before the recent May jobs report, and the weaker reported job gains might potentially temper this optimism.” 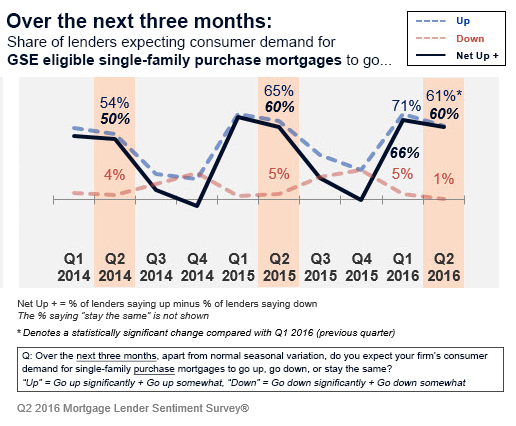 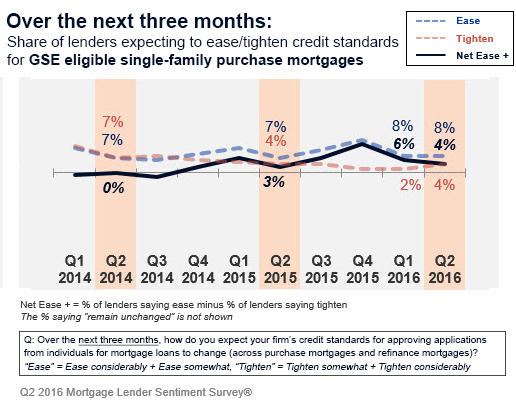 Homeownership at Historic Lows
Is there a shortage of appraisers coming?